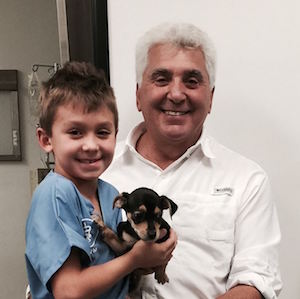 Dr. Campanile is a native New Yorker who upon graduation from the City College of New York in 1969, then attended veterinary school in Europe at the University of Bologna, Italy. After finishing veterinary school he returned home to New York City where he spent an additional 3 years training at a premier hospital in small animal internal medicine and surgery, reptile, avian, equine and primate medicine.

In the spring of 1977 Dr. Campanile went into private practice for himself. Over the next 15 years that practice grew to encompass two locations and employed 7 veterinarians.

Dr. Campanile was the sole veterinarian for the NYC transit police K9 squad from its inception in 1981-1982 until 1990 when he relocated to Arizona. Dr. Campanile also spent 1 year at the Belmont Rack Track, home of the last leg of the “triple crown” of horse racing prior to coming to Arizona.

He has been the owner and director of Companion Pet Clinic since October of 2000 and the principal veterinarian for the HALO Animal Rescue and ASIA feline rescue.

Dr. Campanile is the father of four children, three sons and a daughter. His time outside of the office is spent primarily with them. He greatly enjoys travel, especially to California and New York where he can usually be found in a good restaurant or at the ocean, in a theater or museum.